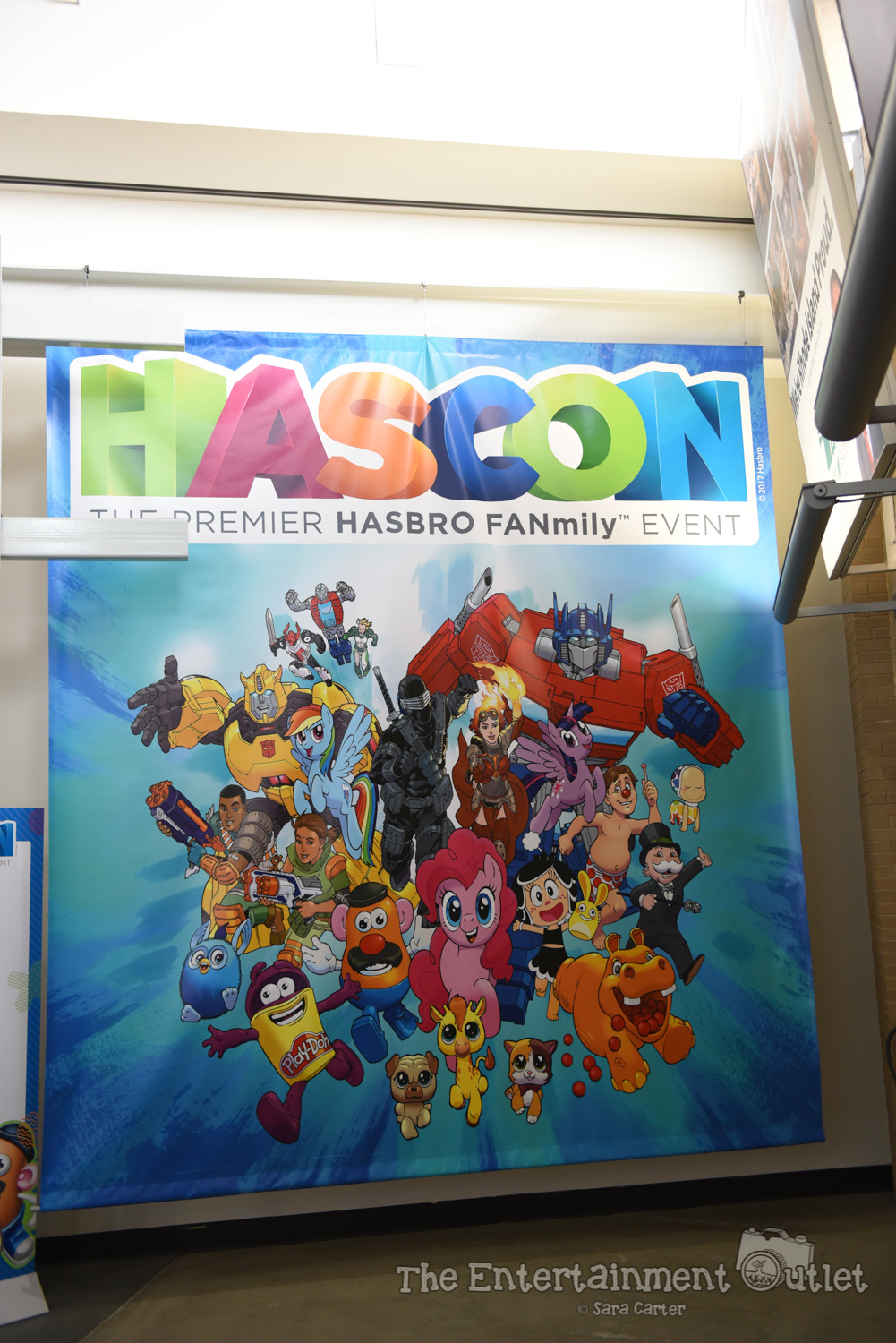 As the days grew closer, excitement grew as well. The cost was a bit more than hoped, but a Groupon popped up making it more affordable. Hopefully. Concerns that it would be a giant commercial with items to sell around every corner made my wallet cry. Who can refuse a small child asking for a new GI Joe or Transformer or whatever else his heart decided he “needed?” But off we went, 10 year old boy in tow. The small child was not aware until the day before, hoping to spare myself some headaches and heartaches about all the things he would want.

We had a busy weekend already planned and didn’t make it to the convention until Sunday afternoon. We opted not to dress up, but wore some Hasbro friendly attire. The Dunkin Donuts Center and Rhode Islaand Convention Center were draped in everything Hasbro.  Giant stickers and posters with all of Hasbro finest, included a bigger than life size Tonka Truck parked outside next to Optimus Prime. Entry was no different than any other con.  The normal metal detectors, our passes were scanned and the friendly staff pointed us in the directions we needed.

When we arrived, there was nothing going on at the “Dunk”.  That space was reserved for panels and music acts.  There was an act coming up later (the company band) but nothing at the moment.

After a quick selfie in front of the HASCON sign we made our way to the Convention Center. I was not prepared for what I was about to enter. It was an extremely organized vendor floor, with no real vendors. This giant layout was in sections of the brands Hasbro sold. Transformers, Marvel, Star Wars, Sesame Street, Disney, My Little Pony. The list goes on. There was a passport book at check in that each grabbed and now the mission was to visit each location and get a stamp. Off we went!

It wasn’t very crowded, which didn’t surprise me. A Sunday afternoon is when a con usually dies down, and it worked out well since there was a lot to see and we were short on time. Our first stop was the Transfomers. There was an array of props on display, video games to try and a short line to meet the original voice actors. We got our passports stamped, some free mini posters and moved along.

Our travels found us in Marvel land. We stopped for a photo op with Spiderman, Iron Man and a life size Hulk Buster.  There were props for a “in the box” shoot, a chance to shoot web, and free spiderman paper masks.  Don’t forget the stamps!

Then, seamlessly, we were in a galaxy far far away.  R2D2 was there! We stopped and grabbed a photo with him, and then sat in the Emperors chair. Darth Vader was there, he didn’t smile. More stamps, more masks, more fun.

So far, I have spent nothing out of pocket. There was nothing I could have bought, even if I wanted too. None of these locations had a cash register. We were carrying so much fee stuff, I didn’t know what to do. We had seen other attendes with huge (I mean HUGE) HASCON bags, so we stopped an employee, and asked where we could get one. They said they were in the boutique in the middle, and that we could just ask for one, that we really didn’t need to buy anything.

I almost fainted. Off to the boutique we went.  I did offer to buy a bag, but they handed me one for free, and I graciously accepted.  The rest of our time continued this way. Visiting the different brands, trying new toys, filling up our bag and taking pictures.  The NERF section was by far our favorite.  They had a indoor arena, where they supplied you with a NERF gun, protective glasses and 5 minutes to shoot your parents. Or someone else parent. Or kid. It was war. I enjoyed the My Little Pony section, and even had a hair extension put in.  It was a little clip that came out quite easily, but I’m sure if I had been a 6 year old girl, I would have died over the excitement.  There was faceprint, and glitter being put in hair, and eager little girls everywhere.

After touring the whole floor and getting our passport stamps, we went to trade the completed passport in.  The prize was a water bottle from Norwegian airline.  Hey, free is free, right? We also got to keep the passport which made for a great souvenir.

We decided to check out the second floor to see what was going on, if anything.  That area looked like your more normal convention. Vendors with items to sell, charities looking for donations, companies promotioning themselves. There was also a giant hall for Magic the Gathering players.

After a short walk through the vendors, we picked up a HASCON 2017 pin and headed downstairs for one more pass around the convention floor to make sure we didn’t miss anything.

We chatted about the con all through dinner, and the whole ride home.  Then most of the next day.  We couldn’t find one negative thing to say about it.

There were no meet and greets with stars going on at that time, or panels, so I’m not sure how those were, but with the organization I saw, I can only imagine they went smoothly.

The small child who is not usually impressed by things, gave it an 11 out of 10. Would go again (he might have begged a little). We played it cool, and said maybe we would go …but we are totally going next year!

A giant Hulkbuster display at the first HASCON in September