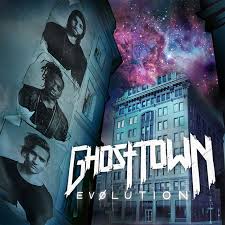 With so many bands hitting the stage as part of warped tour, I find myself having a hard time picking which band to check out next. I decided to look into Ghost Town.

This trio formed in Los Angeles in 2012 and was quickly signed to the Fueled by Ramen record label. With names like, Kevin “Ghost” McCullough,
Alix “Monster” Koochaki, And Manny “MannYtheDrummer” Dominick, I assumed I would be listening to a metal/rock group. Instead I found myself listening to a electronic pop/rock band. With songs like, “I’m Weird” and “Fan Girl”, their up-tempo, fun melodies and adolescent lyrics really drive home the pop aspect.

There latest album, “Evolution” deals with some relevant message to the teen life. The track “Mean Kids” deals with bullying and “Loner” is a song for a generation of kids who; feel alone.

Check out some of Ghost Towns hits below, and let us know if you’ll be lining up to see them!