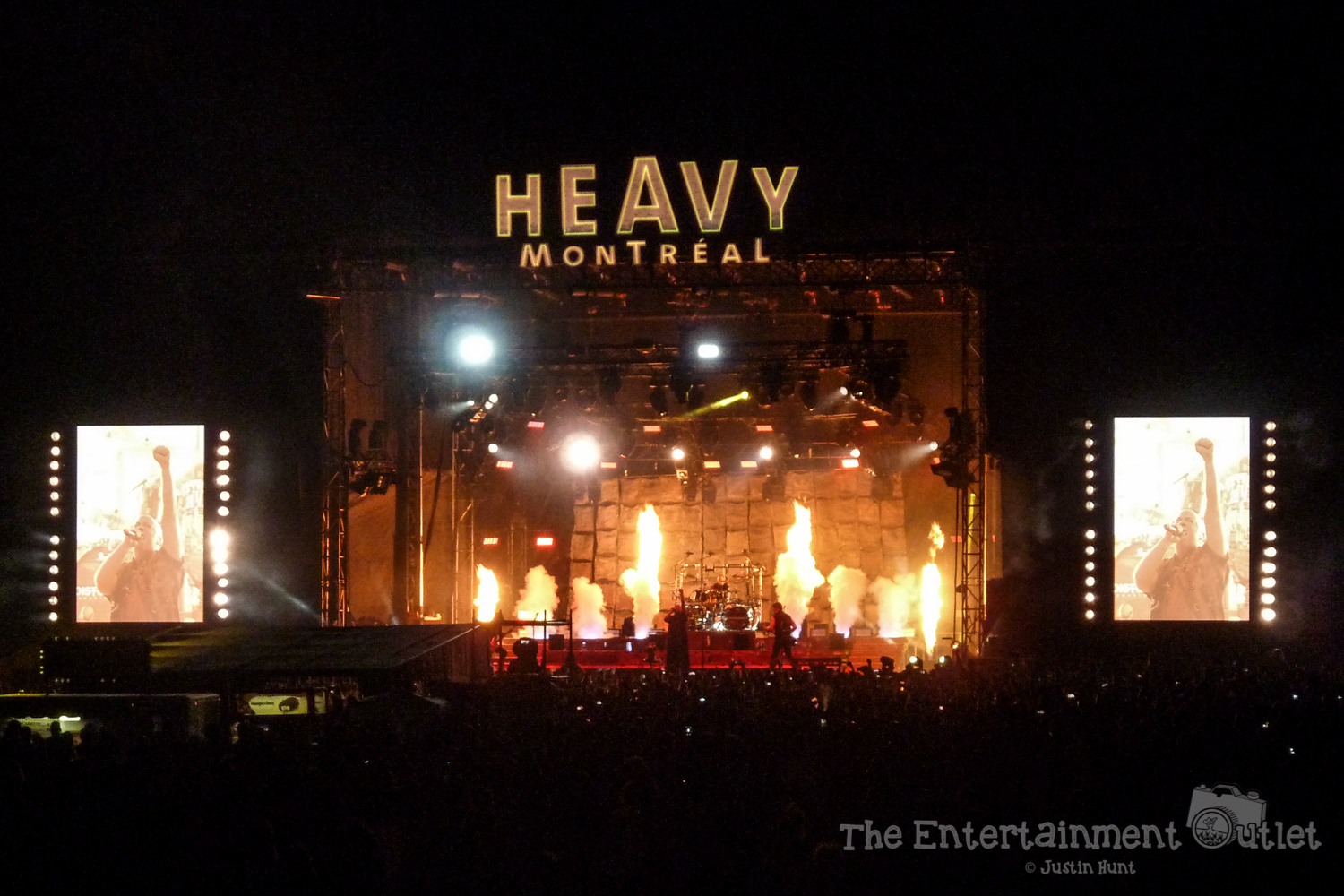 Heavy Montreal takes place at Plaine des Jeux in Parc Jean-Drapeau, located on the island of lle Staine-Helene, just minutes away from downtown Montreal.  This festival started in 2008 with acts like Iron Maiden, Motley Crue, and through the years they have been racking up the big names like Metallica, Megadeth, Slayer, Slipknot and more.

I was not as prepared for this as I had been for the Vans Warped Tour.  This event is much more low key.  The bands are spread out over 2 days and 3 stages.  Like the Warped Tour, when one band ends, the next one starts, but these are easy to find and the schedule can be found ahead of time.  There were almost no vendor or merchant tents set up. I saw tents from Monster Energy Drink and from Molson beer, and I also took the opportunity to make a silly little 3D photo with the Tout Un Monde.  There was no merchandise other than recent and “vintage” Heavy Montreal items.  All shirts were $40 and up, unless you wanted one from a few years ago, which were only $20.

Possibly my favorite thing besides the bands were the hammocks around the Heavy Mania area.  At night it was lit up by strands of bulbs in the trees, and by day it was near Heavy Mania, a no holds bar wrestling ring.  I was never lucky enough to snag one, but the people that did looked like they were in heaven.

Speaking of heaven, I like to eat. There were a few food choices spread around the area, providing heavenly smells wafting through through the grounds.  Of course the favorite Canadian dish, Poutine was well represented.  There was also pizza, BBQ, hot dogs, fish & chips, and desserts.  The vegetarian tent was very popular, though I admit when I saw that chicken was on the menu, I was a bit skeptical.  I eat meat though and grabbed a pulled pork sandwich with made to order fries.  Who needs a hammock when you have pulled pork!

My only complaint were the lines at the portable toilets.  They were clean and there were a lot, but not enough.  The lines moved fairly quickly, but having been to other festivals and not having to wait, this seemed absurd.  There was also long lines to refill water bottles and backpacks, but that I was ready to deal with!

The bands that we saw were some of the best of the best.   On Saturday we were a little late but got to see Sabaton, Black Label Society, Mastodon, Nightwish and Five Finger Death Punch. Sunday we were there when I Prevail took the stage and saw Animals As Leaders, Saint Asonia, Hatebreed, Blind Guardian, Zakk Wylde, Alter Bridge, Breaking Benjamin, Volbeat and Disturbed.


The price was right for Heavy Montreal and the distance to get there wasn’t bad.  In the next coming few days we will share more pictures and individual band highlights from the weekend!